Google is buying cybersecurity firm Mandiant, a move that strengthens its standing in the race for cloud computing dominance. It is Google’s largest acquisition since buying Motorola in 2011.

Google is paying $23 per share in cash for the company, which values the deal at $5.4 billion including Mandiant’s net cash reserves. Mandiant will be folded into Google Cloud.

As more companies move away from on-prem data centers into the cloud, cybersecurity safeguards in the cloud become paramount.

“Organizations around the world are facing unprecedented cybersecurity challenges as the sophistication and severity of attacks that were previously used to target major governments are now being used to target companies in every industry,” said Google Cloud CEO Thomas Kurian in a statement.

Google Cloud has been a distant third in cloud computing. According to Statista, AWS is the leader with a 33% market share and Microsoft’s Azure is second with 21%. Google is third with 10%. The other players include Alibaba Cloud (6%), IBM Cloud (4%), Salesforce (3%), Tencent Cloud (3%), Oracle Cloud (2%) and others.

“This type of offering is what Google needs more of, but they must be integrated services and not just a collection of different advisory services,” said Roy Illsley, chief analyst of enterprise IT at sister research firm Omdia.

“Google is lagging on the high-touch side,” added Brad Shimmin, Omdia’s chief analyst of AI and IoT. “When you look at Google Cloud itself, it is on par with the other hyperscalars in terms of offering native security practices like multi-tier data encryption and external key management.”

“But they leave way too much to system integrators and technology partners to handle difficult security challenges. This acquisition seems able to help them do that in a more end-to-end manner.”

Mandiant is seen in the industry as the “Navy Seals of cybersecurity,” Wedbush analyst Daniel Ives said in a research note provided to IoT World Today’s sister publication AI Business.

Moreover, “Google is doubling down on its cybersecurity footprint at the right time with Mandiant and looking to differentiate itself from the likes of behemoths Microsoft and Amazon in the cloud arms race.”

This deal sets Google apart from AWS and Azure, which thus far have chosen to develop cybersecurity products internally, Ives added. As such, it will put pressure on competitors to acquire cybersecurity firms to keep up with Google. 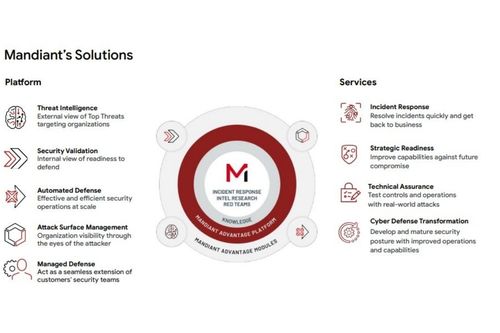 The deal is a “shot across the bow from Google to Microsoft and Amazon” and represents “the tip of the iceberg to a massive phase of consolidation potentially ahead for the cloud space.”

Google said Mandiant will add to its existing strengths in cloud and on-prem security, which include BeyondCorp Enterprise for Zero Trust, VirusTotal to address malicious content and software vulnerabilities, Chronicle for security analytics and automation, among other applications.

📣JUNE DIGITAL SYMPOSIUM Drive your strategy forward and stay on the #Healthcare and #IndustrialIoT pulse with key… twitter.com/i/web/status/1…