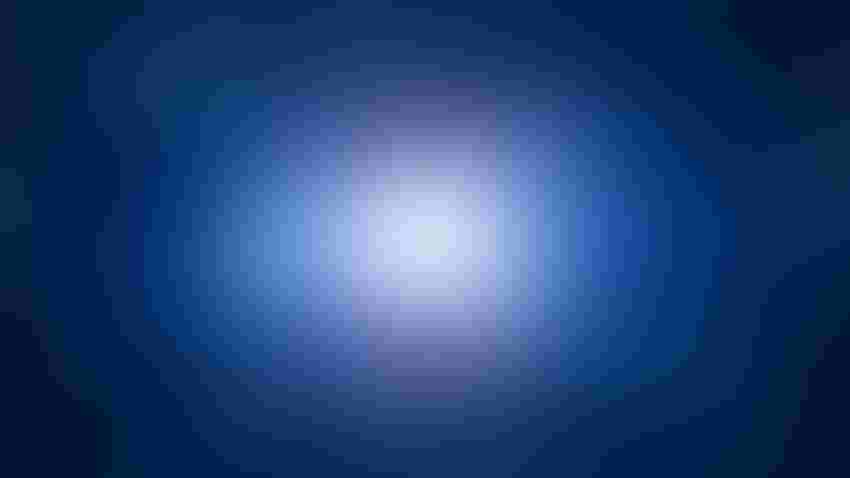 IBM’s System One is a quantum computer with its guts exposed, looking like a golden sci-fi chandelier.

We’re looking at IBM’s System One quantum processor. Talk us through what we’re seeing.

The processor is that tiny chip right down at the bottom. Everything else you can see is there to keep that chip cold, because the magic of the quantum machine, the qubits, will only work if they’re almost absolute zero, colder than outer space.

When this machine is working, there’s a bank of computers sitting behind it, interpreting the signals coming from the machine and sending new signals down.

They’re sent as microwave pulses and all this beautiful engineering is about taking those pulses and making them weaker and weaker by attenuating the signals. Every single layer of this chandelier, as we call it, can interact with the individual qubits on the chip.

To get the results, we take a measurement of the circuit. This then comes all the way back up through the layers and gets amplified in the same steps as it came down.

That allows us to keep this thing incredibly cold and in a coherent state for as long as we can manage.

We’re aiming to get coherency of a millisecond soon, which sounds like a short space of time, but in computing, that’s quite a long space of time.

Everything you see here looks beautiful but there’s also some kind of engineering function. Gold is used to ensure conductivity.

When the machine gets very cold, the wires contract. And if there weren’t those loops there, the whole system would pull itself apart. Although it looks beautiful, everything here is there for a reason.

This is a real machine. We’ve stripped it back so you can see the rather beautiful insides. The real machines are encased in a silver tube and have great science fiction green flashing lights in the back. The sound you can hear is the compressor, which is keeping the helium down at a lower temperature to be able to cool this piece down.

Where physically are IBM’s quantum computers?

We’ve had a total of 54 different quantum computers on the internet in the cloud. Today we’ve got in the 20s, because once we retire them, we replace them in this country. We’ve got 20 physical computers on the cloud in our Poughkeepsie data center. In addition, we’ve already installed machines at the Fraunhofer Institute in Germany, we’ve got one in Japan and we’re about to put one in South Korea. We’ve got our first commercial installation of a quantum computer, happening with Cleveland Clinic over in the States.

If you go on the web today, you can use one of these machines in batch mode. We’re aiming to get into serverless in the next year or so. You’ll be able to interact in real-time with quantum computers on the web and that’s going to be a game-changer.

Next year is the year we’re going to bring out our 1,021 qubit Condor chip. We hope that that will be sufficient to get us to the point where we can demonstrate quantum advantage on a real scientific problem that has real-world implications.

What area is that likely to be?

It’s almost certainly going to be in molecular chemistry or material science. At this stage, it’s very likely to be a hybrid algorithm, using both quantum computers and conventional computers together. When we introduce the serverless capability, you’ll be able to finally interleave the processing of a conventional computer and a quantum computer and get intermediate out of the circuits. That means you can do, for example, a molecular chemistry application that no supercomputer on Earth would be able to do in a hybrid algorithm.

Do you think quantum computing will continue to work in hybrid mode given there are some things that classical computers do better or as well?

Certain problems face the world, especially around the area of material science, that could find answers to global challenges, like how would you get rid of the Haber–Bosch process (an artificial nitrogen fixation process) without using 450oC (842 F) and 200 atmospheres of pressure. It takes 1.5% of the world’s energy supply to create the ammonia that makes the fertilizer that keeps us all alive. If you could take the enzyme molecules that do that in plants and turn that into a catalyst using modeling, you could save a lot of energy.

Or maybe you could work out how to create a catalyst that would take carbon dioxide and water and turn them into useful hydrocarbons like methanol; that would be world-changing to a degree. It’s those kinds of scientific discoveries that we hope we’ll see quantum advantage enable solving real-world problems over the next decade or so.

How much of its quantum processing power is IBM using internally?

Very little. We’ve got a quantum network of 175 different companies from academic establishments to banks and a whole spectrum of research companies. There are larger machines dedicated and reserved to them. We’re very open about this. You can go online and see who has permission to use them, not what they’re running.

On the 20 or so machines we’ve got on the web, we’re doing about 4 billion quantum circuits per day and most of that is external. A circuit is basically one instance of a quantum program.

Since we started this about five years ago, there’s been over 1,000 research papers published. If I had to guess who’s using all those CLOPs (circuit layer operations per second), it is largely students, academia and people teaching themselves.

I go to things like Cyber First in the U.K., and STEM summer schools before people go to universities and the students are all reading that textbook. They know that’s where the high-paid jobs are going to be and have been there already skilling themselves up.

Quantum will have the same kind of impact as Tim Berners-Lee inventing the World Wide Web but in a different way. It will help the banks and optimizations, but those scientific advances in the physical world will be what quantum becomes known for.

As quantum computers grow, they tend to need more qubits dedicated to quantum error correction. Will we get to the point when we’re dedicating fewer qubits?

Now, we don’t dedicate many of our qubits to error correction. What’s going to happen when you get to things like Condor is you will find that there are more qubits assigned for correction, which means that you can then start getting more precise results out of the quantum computer.

That’s just a 1,000-qubit system. Million-qubit systems which are all just pipe dreams at the moment. That’s when you really will see error caching kick in and logical qubits becoming real.

That’s when you start being able to optimize the portfolio of entire banks. But that’s a long, long way away, just as things like breaking cryptography are a long way away in terms of the sector.